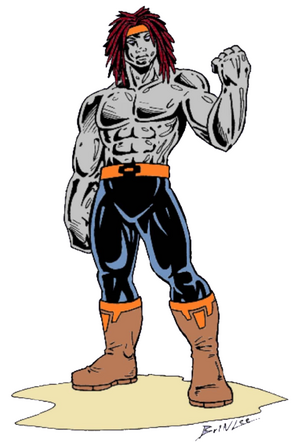 Heavy Metal is Tendril’s somewhat dimwitted partner. Heavy Metal by himself is rather tenderhearted, but he and Tendril have a long relationship of relying on one another, and thus Heavy Metal gets into trouble right alongside his friend. Heavy Metal was active in the 1980s as a smalltime thug and partner of Tendril, his "best buddy".

Heavy Metal was created by Tim Kirk for his Hearts & Souls. The artwork for Heavy Metal comes from Character Gallery I: Superheroes 1. Artwork used with permission by Vonshlick Productions.