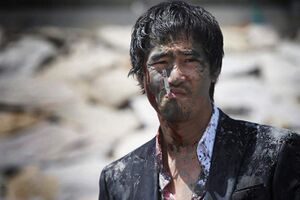 Heathcliff is a bakeneko, a cat shapeshifter of Japanese lore who has mastered his humanoid and 'werecat' forms much more quickly than many of his peers. The average age of a bakeneko is sixteen years a cat, Heathcliff only took seven years and he bets if he had been around people more it would have been sooner. He has been able to shift into human form for just over six months and has taken a liking to what being humanoid gets you. Drink, drugs, parties, privilege, it all rocks pretty hard. For that reason (and definitely not because he cares about any of these people) he fights the more destructive of the beasties that go bump in the night.

Heathcliff was whelped in a litter of six back during the sneezy periods of sunlight around seven years ago (May 18th, 2011) and he spent the first 10 months of his life with his mother and siblings. He was chased off and lived an exemplary life around the edges of Gauntlet City scrapping with alley cats and outsmarting larger creatures to survive. He eventually was outdone by a dog he couldn't maneuver around and figured his life was over until he was saved by Jasmine Mansfield on he way home. He fought, because humans were weird and he was hurt, but she got him healthy, bathed, and introduced to tuna.

When around her and the nerds at the comic store he started getting the idea to try and mimic them until one day he became human almost exactly like them. Maybe a bit better. He still has claws and a tail after all.

As a human Heathcliff has gotten into mischief other cats could only dream about and has a little storehouse of suits, booze, drugs, and other collectibles that caught his eye.

Heathcliff aided a group of monster-hunters in Chantsville against a diabolical cello affiliated with the Twilight Orchestra.