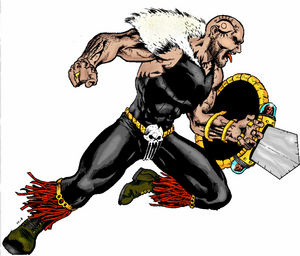 The Hammerer is a big, thick, thick-headed thug. He carries a shield that absorbs kinetic energy and is "linked to his dark soul". The shield reduces any harm he takes in combat, making him not just a tough opponent, but one that just keeps coming back. Luckily, The Hammerer doesn't have big ambition and prefers to work for others rather than commit crime on his own.