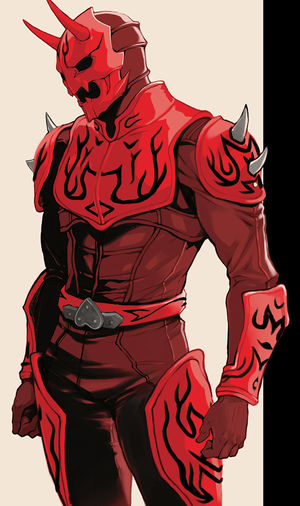 Virgil Vaillancourt, aka Guardian Devil, is a man of wealth and taste who is also superhero and mentor to Mephista. He reportedly gained his powers by tricking a demon out of them. He is a wily and intimidating fighter and not fully trusted by authorities like AEON and the police of Precinct 13.

Guardian Devil provided contract-based powers to his protégé, Mephista—he signed over a part of his soul to her to give her powers. She is pretty over the whole "devil" branding, but it's all built into her gadgets and uniform. The demon Ozroch attempted to trick Mephista into signing away that part of Guardian Devil's soul to them, but was unsuccessful.

Virgil later lost his fortune due to the machinations of Ozroch, and had to make ends meet as an antique store employee in Chantsville, where he helps to found the Chantsville Crusaders, serving as the team's supernatural expert. There he also got to know Diana, the Red Exorcist, who trusted Virgil as a fellow arcane expert but thought Guardian Devil was a hothead putting his soul in danger.

Guardian Devil was an NPC in Alexi Sargeant's Masks game in May 2019, and then a PC played by Alexi in Rich Rogers's Hit the Streets game at Gauntlet Con 2019 in October 2019.