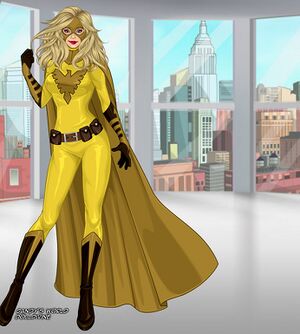 Gloria Swanson secretly known as The Golden Eagle, is/was a member of The First Guard, and the mentor and trainer of former First Guard member, and Allied Angels member, Silver Swan aka Sylvia Swanson. In their secret civilian lives, Gloria is known publicly as Sylvia's Aunt, when in fact she is secretly her actual mother.

Together they patrol the streets of New Gauntlet City, taking down criminals of all shapes and sizes!

Golden Eagle and Silver Swan serve as something as poster children for American superheroes, and the boys fighting overseas. They have even operated overseas fighting the dirty Nazis when their missions took them there.

Golden Eagle and Silver Swan's main Arch Enemy is the mad scientist known as Doctor Atomica, who uses her brilliance for her own nefarious machinations. It's been rumored that some of her inventions have been developed for use of the allies to help fight the war overseas.

The Atomic Engine of Eternal Darkness![edit]

During a battle with Doctor Atomica sometime in the 50s, Golden Eagle, Silver Swan, and Doctor Atomica all seemingly disappeared off the face of the Earth when the Atomica Engine exploded, only to reappear in the Modern era!

In Gloria's personal life, she is often accompanied by her "close friend" and confidant Dr. Meredith Sampson. When Gloria and Sylvia aren't busy with their own teams and adventures, and when at home at Swanson Manor, they are attended by their long standing maid, Juliette. Both Juliette and Meredith are aware of the Swanson's secret Lives, and while not entirely approving, they know that can't stop them.

Gloria is one of New Gauntlet cities most prominent socialites, and inheritor of the Swanson fortune and holdings, as such as an unwed woman in the early 20th century, it would be improper for the public to find out she is also an unwed mother, so she kept her pregnancy a secret from the world. She never speaks of Sylvia's father, as he does not matter to Gloria, and was only used to dispel rumors about her personal life, and to avoid any possible scandal for herself or her friends. So when Gloria returned to the public eye with an infant, a story about her cousins from Europe's tragic death, leaving behind their orphan daughter was concocted, so that she could raise Sylvia without out too much suspicion.

Gloria never intended to train Sylvia into becoming a crime fighter, but when Sylvia discovered her "Aunt's" Secret headquarters deep beneath their Estate, Sylvia gave Gloria little choice, as she could tell the willful child would go out on her own with little training, and likely get herself hurt. So the Silver Swan was born!

Despite being a fearless crime fighter and adventurer, Gloria's personal life is another matter entirely. She is a gay woman in a time period where it could be ruinous for her and her family, so she rarely expresses her emotions, and has tried to teach her daughter to keep her own feelings in check, and to never speak of them in case the wrong person might find out. It wasn't until their time in the modern age, when Sylvia stood up and expressed herself and introduced Gloria to her girlfriend, Red Star, that Gloria finally expressed regret for repressing herself for so long.