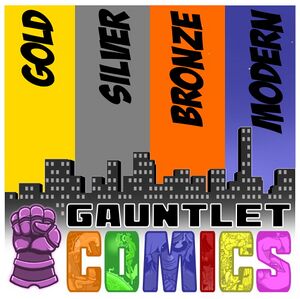 The idea of Generations is taken from the excellent RPG Masks: A New Generation.

There are four generations of super-powered folks in the history of Gauntlet Comics, starting in the 1920s and leading up to today.

Sometimes they fought aliens or robots, but the villainous opponents of the Golden Generation were often just powerful criminals, unscrupulous corporate fatcats, or corrupt politicians. These heroes had a direct and real effect on the city’s mundane existence.

The Golden Generation had real battles to fight, real struggles. Women and minority heroes were often laughed at, degraded, insulted, and ignored— they had to fight for every single ounce of respect they could get. The entire city was filled with the prejudice and bigoted ideas of that era. While the conflict between Champion and the pugilistic Deadly Devil might have been simpler than those faced by later generations, Champion’s struggle as a homosexual man and public figure in the 1940s was far from simple.

Almost all of the Golden Generation heroes are either gone or retired. Those who are still active are either trying to reclaim their lost glory or success or they’re the most powerful, most impressive, and most enduring members of this whole generation. The Gauntleteer is the only publicly active Gold Generation superhero active in New Gauntlet City.

There was a sea change in the superheroic scene of New Gauntlet City during the ‘50’s. For reasons unknown, superpowers became more powerful, and with their increased powers came ever greater threats.

Many suprologists consider the first hero of the Silver Generation to be Flag Waver. He was the first widely acknowledged representative of a new kind of superhuman. Flag Waver was bright, shining, and powerful. Flag Waver didn’t contend with costumed thieves. Instead, he fought all-powerful time-altering androids and monsters risen from fiction itself to convert all of our reality into words on a page. The battles he fought, while still mostly centered around New Gauntlet City, were often struggles over the fate of the entire world.

These powerful, impressive, explosive abilities and these incredible fights against enormous foes characterized this generation. The battles at their worst leveled whole city blocks, or changed the color of the sky for days, or left a scent of ozone and smoke pervading the entire city—but New Gauntlet City became more adept than ever at repairing the damage and restoring itself to “normalcy” with incredible speed.

The Silver Generation is still largely around and in power today. They’re reaching the end of their time, however, and many are looking into retirement of some kind. Many of the Silver Generation would love nothing more than to find successors they can shape directly into new versions of themselves, to ensure that things continue exactly as they have so far.

Most suprologists, historians, and sociologists agree on a single moment as the transition point from the Silver Generation to something new, something more complicated and ambiguous: the Bronze Generation.

The First Guard as the first and most powerful super-team in New Gauntlet City. When their villanous children rose to challenge them, they were unable or unwilling to defeat their own progeny. This resulted in the Fall of the First Guard. The children of the First Guard called themselves the Black Guard and ran rampant over the city for years until they fell into infighting.

The ripples touched the new generation of heroes growing up in New Gauntlet City. This open villainy started a wave of introspection among the younger generation, forcing them to take a harder look at the failures of their parents and mentors. They saw that the Silver Generation often seemed more focused on grand gestures than real change. What’s more, the Silver Generation still clung to power, held their positions of dominance over the city and the world, and this new generation had little to no room to call their own. Young heroes changed their identities and their ideas. New heroes rose up, touting new ideas and methods.

The Bronze Generation was the first generation to truly doubt the entire idea of superheroism as it had existed so far. They opened doors to exploring different ways of being heroes, even if many of those doors led to dark places. They took on social issues their parents and mentors had left alone. And they carved out their own place as a darker, more exploratory, more cynical generation than the ones that had come before.

The newest generation of superheroes, most of them still quite young, comes from a unique place. They live in a world well-used to the idea of superhuman individuals. Dinosaurs stomping down Main Street is just a thing that happens sometimes; invading aliens and escaped products of mad science are treated as somewhere between average problems of the city and tourist attractions. As the latest superheroes to arrive on the scene, they have a stronger, more innate grasp of superhuman issues than any other generation—though that’s not always a good thing.

They don’t have a name yet, really—the name “Modern Generation” is a tentative placeholder, used right alongside “The New Generation,” “The Young Generation,” and other names. They haven’t yet made their mark on the world, nor have they developed as strong an identity as those who have come before. New Gauntlet City doesn’t know what it will become as they grow up and rise to greater and greater power.

Some members of the Modern Generation have made splashes, especially in the realm of celebrity and the internet, like cosmic-powered Spop-star Starborne. Some have apprenticed themselves to older heroes, earning their names in the city at large as scions of the powers that be. Most are aware of fame and popularity, of the voices of everyone around them, more than those of other generations. And they all feel the eyes of the older generations on them.

So far, they’ve proved themselves a generation of greater hope and greater skepticism, somehow, than any other generation. They’re aware of both the triumphs and the failings of those who came before them, in a way no other generation has been. They see the Gold Generation’s nobility, and all-too-easy oversight; the Silver Generation’s power and success, and domineering attitudes; the Bronze Generation’s frustration and search for new alternatives, and ultimate failure to change anything significantly.

All of that history weighs on them, as they try to determine who they want to be, and what they can do. Maybe they want to change the world; maybe they give up the fight and go for fame instead. Maybe they think the whole system needs fixing; maybe they try to work within the rules. In all cases, they’re still finding their way, deciding exactly what they’re going to be, and what world they’re going to make.

The world awaits with trepidation and excitement to see what they will finally become.