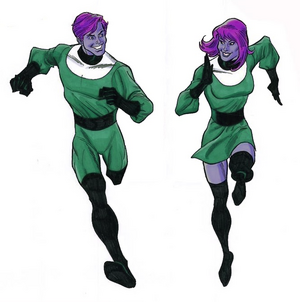 This brother/sister duo of evil speedsters (Zephyr and Ella) are out for revenge for the accidental death of their parents fighting the Legion of Valor. They've raced and had relationships with Speed Demoness.

Zephyr and Ella's parents were their adoptive parents. Their actual father is Loki, the trickster god of the Norse pantheon. He has recently revealed himself to his children, and has been talking to them about their true legacy as his chosen on the Earth to carry out his will.

The Twins were created by James Stuart for his RPG Legacies. They weren't originally supposed to be demigods; Rich added that.