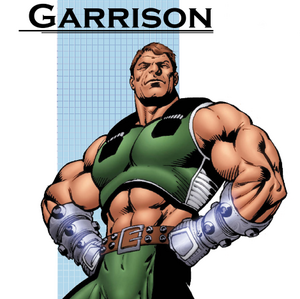 Javier Jacinto Vargas, a.k.a. "Garrison" is a seven-foot-tall behemoth of a man who is superhumanly strong, able to lift thousands of pounds. Also, Garrison is able to transform the tissue of his entire body into an “organic osmium steel”-like substance, which grants him a high degree of resistance to damage or harm.

Garrison joined the Future Legion when they were "good guys" working for Alistairs' by serving Scoville Terrace, but he was extorting local businessmen for his "super services". When their villainy was exposed on SeeYa.com, the team switched to full-time villainy, and Garrison was happy. He didn't like lying about being a bad guy.

Garrison's picture and powers are taken from the Watchguard Sourcebook by Xion Studios.