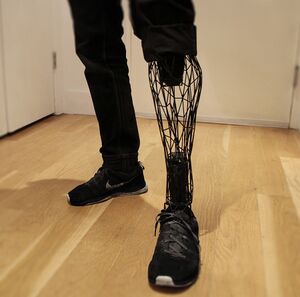 Framework, aka Judith (not Judy!) Broder, is a brainy inventor with self-made artificial limbs and member of the AEON After-School Alliance for At-Risk Supers. She has been a technological prodigy from a young age, and after a car accident took away her legs she created high-tech replacements. Her parents have forbidden her from removing and replacing any more of her limbs until she is at least thirty. Her biggest shame is that she feels she's responsible for her teammate El Borron's transformation, because she was working with the scientist whose experiment changed him—and unbeknownst to anyone else, she modified the device's energy setup immediately before the accident.

Framework's drive is the fix the world so it can never be broken again. She's learned a modicum of humility from the advice of her rabbi. But her confidence was buoyed by using gadgets to (temporarily) rebuild an Undertaker's Row building destroyed by a superhero battle. When last seen, she was messing around in a new laboratory sanctuary that her parents pulled strings at the university to provide for her.

Framework was a PC in Alexi Sargeant's Masks game in May 2019, played by Leah Sargeant.