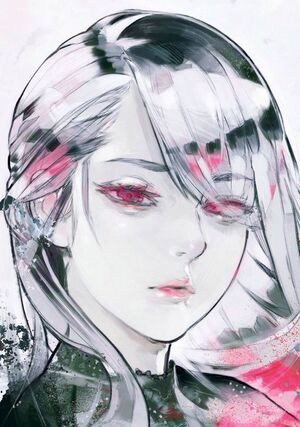 Fermata is a superpowered youth and current student in the School of Hard Knocks. Though a model student, Fermata's true loyalties lie within the mysterious cult that raised her, equipped her with exemplary occult knowledge and helped train her telepathic abilities, the Twilight Orchestra.

Formerly known as Cameron, the girl who'll become Fermata ran away from home after her psychic powers emerged and was found by the Orchestra. Through the tutelage of a woman who will one day become the Orchestra's Conductor. Throughout the years, Fermata was trained in employing the Orchestra's strange, musical magic, mostly through the form of whistling.

Due to her upbringing, she became a firm follower of the Orchestra's tenets, namely that the group exists to bring about the world's endless sleep through their Dark Idol. Though the Dark Idol has been brought into the world, they need time to come of age and so their protection is the Orchestra's main goal. Her first, proper mission under the name of Fermata was to break the Dark Idol out of New Guard Academy where, though she had no interaction with their messiah, she became unfatuated with her.

For seasoning, Fermata was sent to learn under Domina Carnifex at the School of Hard Knocks where she was placed in a team consisting of Danny "Atlas" Mak, the ever-masked Arachnophobe and Jacob "Thunderchild" Mordaci, with whom she had been acquainted with as a child. Together, the team eventually gains the monicker "The Firebrands" after they led the charge against a gathering of heroes that resulted in the defeat and disappearance of The Gauntleteer. Within that clash, Fermata helped subdue the hero Cadenza, a traitor to the Orchestra.

Unbeknownst to Arachnophobe and Thunderchild though, Fermata had been goaded by Atlas to follow her heart's desire and nearly came into contact with the Dark Idol, only to be misled towards the heroes' gathering by Cadenza's meddling.

While the team became targets and were ostracized from the School, Fermata had gone back to the Orchestra, risen up the ranks to the point of having subordinates and acquiring more occult knowledge to help her mission. This has led some distance between herself and the team, especially Thunderchild after the latter discovered his origins.

Still, Fermata committed herself to the latest cause of The Firebrands, which is the removal of Domina Carnifex as a threat to them and saving their fellow students from her. Unbeknownst to the team however, one of Fermata's superiors in the Orchestra, Sforzando, has given her explicit orders to kill Domina Carnifex and remove her from the board entirely.

In the preparation for the fight against Domina Carnifex, Fermata caught wind of a counter spell being created by the trapped Cadenza and tried to address the problem. Unfortunately, Cadenza managed to trip Fermata up with the revelation that the Dark Idol will be used up completely, in mind, body and spirit, if she completes her appointed task. Fermata left angrily, leaving a whole behind for Cadenza to be rescued.

She participated in the assault on the School of Hard Knocks, saving Atlas from a heat blast and delivering the killing blow to Domina Carnifex. A whispered, unrepeatable name led to her consciousness being sent to another dimension, with the feedback of the attack bringing the Gauntleteer back.

With the Gauntleteer back, the Firebrands began making plans to help out Domina Carnifex's victims bu coming together to create a new schooling community. However, the Twilight Orchestra called Fermata back who answered the call but full of doubts. Before she left though, she promised to come back to the Firebrands. That came sooner rather than later as the Conductor honed in at Fermata's insecurity and doubt. Before she can enact a re-education though, Fermata managed to escape thanks to a spell she and Thunderchild had concocted, committing herself to the Firebrands fully.

She now plans to free the Dark Idol from the Orchestra's clutches and let her know of her fate.

Fermata is a PC in Ferret's Masks: School of Hard Knocks run in June-July 2020. She was played as a Legacy by Leandro Pondoc.