Ferala is a cat-person from the underground world of Kam'Mir, the hollow world that exists within the planet's core. Alongside Huntara, she left her home, and employ under one of the 7 Sorceror-Kings, Carmandra, to pursue adventures on the surface. Though their adventures and recklessness, led them down a criminal path, which is how they ended up at the New Guard Academy. 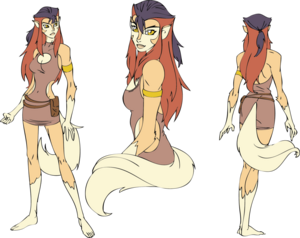