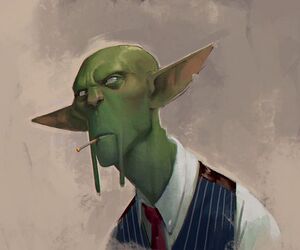 Ernst the Goblin is a metalworker and artificier, exiled from the fae realms for being too into iron. He hangs out at Coven Prime, and creates weaponry for those who can pay—including Silas LeBeau, who had him create a massive car-mounted ballista.

Ernst was also involved with Silver Dancer's bargain that turned her into the amnesiac, partially-silver warrior that she is.

Ernst was rumored to be conspiring with a vampire to usurp the power Diamond Ford held as Vigilant of Mortality.