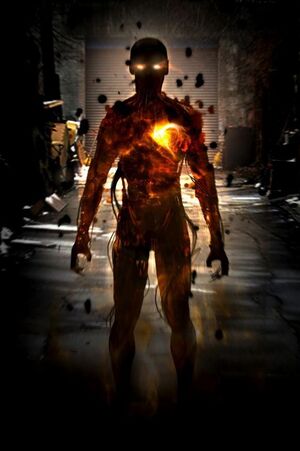 El Borron, aka Matias Garcia-Lopez, is a young man transformed into a blob of dark matter in a super science demonstration gone wrong. He is sensitive about his no-longer-human form and wears nice suits to compensate for it. He can sense through his exotic matter flesh in various superhuman ways and his body can mimic the properties of various materials and sometimes even energy. He has managed to cause parts of his body to radiate heat, stretch or extend, and even become gaseous or immaterial to bypass various obstacles.

He is a member of Batswarm (Team) and very committed to the idea of the team as a force for good. Unbeknownst to him, his teammate Framework blames herself for his transformation. The team came to back him up when his parents were kidnapped by Mr. Hearse. After she rescued his folks, Brightling proposed marriage to him, to his befuddlement.

El Borron was a PC in Alexi Sargeant's Masks game in May 2019, played by Chris Newton.