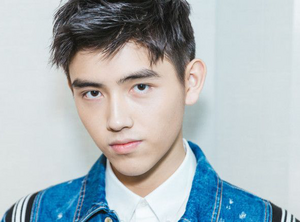 Danny Mak is a metahuman teen who joined the villainous School of Hard Knocks under the alias Atlas, before becoming a found member of the anti-heroic mercenary group The Firebrands . Physically adept, he spent some time before joining the school as muscle-for-hire, including some work with the Dead End Queens. He has recently taken on the new alias Titan.

Danny Mak was born in Hong Kong, and spent the first few years of his life living there with his family. He was diagnosed with a unique genetic disorder that resulted in rapid cell replication, and his parents received an offer from Optimax Industries to take care of the boy and provide for his medical needs. Danny spent the next ten years of his life as part of a research project into military applications of metahumans at the Optimax facility in New Gauntlet City, led by Doctor Hastings. Hastings designated Danny with the codename Atlas, and the experimentation that was performed on him resulted in exceptionally fast but controlled cell regeneration. Growing up, the staff and subjects of the project were his only family.

When the Optimax facility was raided by Artemis & the Nobodies, Danny was able to make his escape from the facility during the confusion. However, he was forced to leave his fellow test subject and friend/lover Apollo behind. Following his escape, Danny took on some muscle-for-hire work to pay his bills, while spending his time with his Uncle Tony (a distant relative of his father, restaurateur, and organised crime affiliate) before being recruited to the School of Hard Knocks.

The School of Hard Knocks / The Firebrands[edit]

Played by David Morrison in a 2020 Masks games ran by Ferret using the Bull playbook.

As a "school project", Danny led his classmates to a raid on an Optimax blacksite where a new super-powered serum was being developed, and several other metahumans were being held - including Apollo. The team were successful in busting them out and recovering the serum, but Danny's triumph was undercut by his lingering resentment towards Optimax, his feelings of survivors guilt with Apollo, and an unspoken attraction to Aracnophobe.

Danny talked Fermata into skipping school to follow up on a personal project involving a former member of her cult. They caught up with the rest of the team at a massive confrontation between the School of Hard Knocks and The Gauntleteer and a host of other superheroes. While defending Fermata, Atlas took the Fomorian's artifact-level axe, and used it to sever the Gauntleteer's gauntlet. After the battle was over, though, he got into a fight with Thunderchild who felt slighted by Danny's decision to go off alone with Fermata.

After a series of hijinks, Danny and Arachnophobe stole the Gauntleteer's gauntlet from Domina Carnifex's office, only to discover that people's memories of him were fading. They fled the school and Carnifex's wrath, and went to rescue Arachnophobe's brother. Danny destroyed their house in the process of effecting the rescue, and the team fled in Thunderchild to seek sanctuary with the Dead End Queens who Danny had lived with when he first escaped Optimax.

Issue 4 Following the events of the previous issue, Danny spent some time with Fermata and Thunderchild, building up their links with the criminal underworld and the remaining students at the School of Hard Knocks, ferreting out information about Domina Carnifex's plans. During the confrontation with Thunderchild's "father" at the SSIN laboratories, Danny took on the animal-human hybrids who serve Tony the Tiger. Following the job the team got together enough money to buy a new headquarters/home. Once they settled in, he confessed his feelings to Arachnophobe.

Issue 5 After defeating the powersuit Justice Hammer and visiting its owner, the (retired?) superhero Trailblazer - now a brain in a jar - the team learnt more of the current state of the Gauntleteer. Back at their headquarters, Danny spoke with Thunderchild and his brother (?) Jacob about how they might use the Gauntlet to bring back the Gauntleteer - or at least find a new one. He received a message from his old friend Whisper telling him she was in trouble back at the School. The team met with her at Uncle Tony's restaurant Happy House, where they learnt of Domina Carnifex's plans to strip the students of their powers using the serums stolen from Optimax. The team put a plan into place to rescue the students, recruiting help from the Dead End Queens and the kids rescued from Optimax. Danny had a heart-to-heart with Apollo, confessing the guilt he still felt.

Issue 6 The Firebrands, with the assistance of the Dead End Queens and the Optimax escapees, launched an assault on the School of Hard Knocks. Danny led the charge against the goons guarding the facility, and helped free some of the students - including Elliot Jamison - from a corrupted symbiote, though he lost temporarily his hands in the process. This didn't slow him down for long, though, and they were able to confront Domina Carnifex and recover the Gauntleteer from his extra-planar imprisonment.

Issue 7 In the wake of their defeat of Domina Carnifex, the Firebrands looked to find a place for themselves in the city. While Danny is still having a hard time settling, the closest he has managed so far was with these people, and he wanted to keep the group together. He tried to persuade Fermata that she could find a purpose outside the Orchestra, and assisted Thunderchild with his plans to take care of the stray metas released from the School of Hard Knocks. He doubts his ability to provide a better life for them, but is ready to stand in defence should anyone come for them. His relationship with Apollo remains unresolved, though he was glad Apollo found a place in House Silq. He received a new alias from Arachnophobe, now going by Titan rather than Atlas, to break another tie with his old life as an Optimax research subject - and was very touched by the gesture.

Danny has incredibly rapid cellular regeneration, and with exercise and chemical augmentation his ultra-dense skin, bones and muscle. He weighs approximately four times what would be expected for his height and physique, and has superhuman strength, endurance, toughness and rate of healing. He also possess speed and agility beyond peak athletic performance and is highly trained in close-quarters combat.