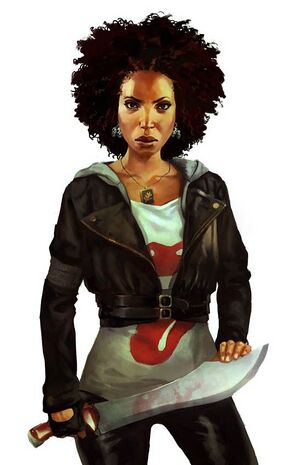 Dancing Panther, aka Gwen Blossom, is a rebel and member of the Wildcats from Lower Park, a poor but once beautiful neighborhood. She is dedicated to defeating the corrupt official Joseph Robertson Sound, Jr., who defrauded Lower Park.

The Wildcats discovered an New Gauntlet City by-law: the winner of The Celestial Tournament earns an ex-officio seat on the city council. Gwen entered the tournament to win this seat. But things got complicated when her girlfriend Agent Xia Fang came to incorrectly believe she was the Sable Tigresa—and that's before Gwen discovered a conspiracy among Joe Jr., AEON, and Iron Bear to blow up the mountain! Gwen ended up grappling with Agent Rockwell of AEON on a helicopter ladder, getting the best of the fight but falling off and down towards the city below.

Gwen formed a stronger bond with Red Bear during the tournament (reminiscing about their previous team-up in the crossover comic, "Punk and Sickle") and it was Red Bear who leapt off the mountain, improvised grappling hook in hand, to make sure Gwen didn't plummet to her death.

Her legacy is continued, in some ways, by her son Bobby Blossom in the present day.

Dancing Panther was a PC played by Mario in Alexi Sargeant’s Hearts of Wulin game in May 2020.