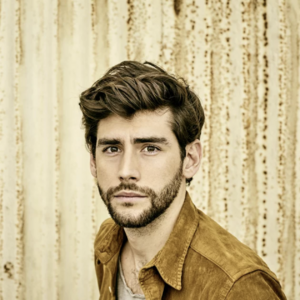 Damario Palomares is one of the ensemble protagonists of the short run series Sunset Kills: Break the Darkness. At the beginning of the series, Damario is a demon slayer and a supernatural chosen one in New Gauntlet City, operating in Chantsville.

Damario has been struggling to live a normal life ever since his parents disappeared without a trace when he was sixteen years old. His life also changed drastically when he discovered a silver knife in his grandmother's belongings that embroiled him in the supernatural world that surrounds him and forces him to face powerful supernatural enemies.

Damario can be described as a dedicated student and protector. He is stand-offish, intelligent, athletic, protective, and overbearing at times. He can be vulnerable and hotheaded when confronted by things that challenge his interpretation of a situation.

Damario was born on October 31, 1996, in Gauntlet City and lived there peacefully for 16 years with his parents, as well as his aunt Ramira. They led a quiet suburban life, free of the supernatural. However his life was turned upside down when his parents disappeared without a trace when he was sixteen. Ramira became his legal guardian and he moved in with her to an apartment across the street from the Vermillion Room Speakeasy.

When he was moving in with his aunt, Damario discovered a silver knife that belonged to his grandmother. Within hours of touching the knife, a demon attacked Damario and Ramira. Through the knife's power and an awakened spirit in Damario, he was able to vanquish the demon and save his aunt. Since that day, he has been put on a path to slay the demons that stalk the night.

Damario learned that it was dangerous to get too close to anyone when a man he was dating was killed by demons while waiting to meet up with Damario for a date. Damario now regularly patrols Rockwell Park, both to save new potential victims from demonic attack and to punish himself for the life he couldn't save.

Throughout the Gauntlet Comics Series[edit]

While on an evening patrol with the others in his troupe of monster hunters, Damario rescues a group of insomniacs that have fallen under the spell of a cursed pamphlet from the community college. Damario and company manage to free the insomniacs from the clutches of a cadre of imps that were attempting to use their life force to summon their demonic master. Through interrogation of the imps, the group discovers that demons are flocking to Chantsville to witness a performance by the Twilight Orchestra at the Chantsville Concert Hall Gala later that week.

Later that night, Damario learns that Ramira has accepted a job performing flamenco at the same gala the demons were planning to attend. He promises to attend the performance, planning to put a stop to whatever plans the demons have in store for the evening and protect his aunt.

The next evening, Damario discovers Milo and Zoe at the Vermillion Room Speakeasy debating what to do with a drug that was given to them by Ms. Osborne-Roch. He attempts to convince them that taking an obviously-demonic drug is a bad idea, but fails to prevent Zoe from taking the drug. Later that night, Heathcliff appears at Damario's window to deliver news of the impending demonic attack at the gala. The two of them vow to put a stop to the plot.

On the night of the gala, Damario arrives with Ramira and manages to smuggle his silver knife in without alerting the security guards, but Ramira sees it. He pushes her away to protect her, and finds Zoe. They discuss Zoe's misadventures with the demon drug and then discover Heathcliff with a hellhound hot on his tail(s). While Zoe goes to meddle with the orchestra, Damario and Heathcliff dispatch the hellhound.

Once the performance has started, portents of doom start to manifest in the concert hall. Frogs begin to rain down from the sky and the orchestra continues playing (discordantly due to Zoe's machinations) as the song attempts to open a rift in reality. Damario trips the sprinklers which, along with the frogs, manage to remove most of the audience from the concert hall. Heathcliff halts the performance and begins fighting with the demonic cello that is powering the ritual. Damario jumps in to slice the neck of the cello, loosing the strings and pegboard and ultimately halting the ritual. The group repurposes the wood of the cello into religious icons in order to keep its power at bay.

Damario is last seen walking through an alley in twilight as a figure follows him. He sneaks back up on the figure to discover it is Buckley, the man from his English class that he has a crush on.

Damario is compassionate, noble, intelligent, athletic, dutiful, and intense. He is seen as more of a loner-type, as his outward demeanor fluctuates between coldly distant and fiercely protective. He grew up in a very loving environment with his parents, but began closing himself off when they disappeared. Though he tries to distance himself from people to avoid endangering them, he cares deeply for people once he's established a connection with them.

Physically, Damario is a very handsome and attractive young man with an angular face, light olive complexion, brown eyes, and full brown hair. He is roughly 6'2" and has a slim, athletic physique. In terms of his fashion sense, he wears casual, sporty attire that works well for on-the-spot combat. He wears primarily dark colors and little-to-no jewelry. His hair is often swept up in a pompadour style, making him appear a bit taller than he already is.

As a Chosen one, Damario is particularly lethal against a particular kind of enemy, namely demons. His silver dagger allows him to deal extra harm to demons where normal attacks would do less damage.

Damario has a knack for showing up at just the right moment. He has a flair for the dramatic, which lends itself to demanding attention in dangerous situations, sometimes putting him at an advantage.

Damario possesses all the typical weaknesses of a human.

Damario and Zoe became friends when a demonic attach at a party brought the two of them together. Despite Damario's efforts to distance himself from people who could get hurt in the line of fulfilling his destiny, the two of them have formed a close friendship based on mutual respect and a friendly relationship of jokes and jibes. Damario has over time learned to rely on Zoe more for emotional support (and sometimes medical support in the event of particularly demanding combat).

Damario met Milo when the young man turned up to warn Damario about an impending demonic incident he'd read about in a comic book. Initially disbelieving of such a declaration, Damario attempted to shake Milo off. In the end, Milo's prophecies were correct and it was only by relying on Milo's encyclopedic knowledge of his "graphical grimoires" that Damario was able to vanquish a particularly ferocious demon. Since then, Damario has gradually opened up to the young mage and watched him grow.

Damario thought he was the only one to witness the death of his boyfriend in Rockwell Park, but Heathcliff was there too. Since then the bakeneko has watched over Damario and fought alongside him to protect the people of Chantsville. Damario admires the light and carefree way that Heathcliff lives his life and the bravery he shows in combat, even if Damario believes he takes too many risks. They have a lively banter, with Damario usually convincing Heathcliff to his plans by bribing him with tuna.

Ramira is Damario's biological aunt, sister to Damario's father. She is a manager at the Vermillion Room Speakeasy. She took Damario in when his parents disappeared when he was 16, even though she was only three years older than him. The mystery of what happened to her brother and his wife has always haunted her. Ramira is a talented dancer, studying the art of flamenco. She was attending college to study dance when her brother disappeared and had to drop out and work full-time in order to make enough money to support herself and her nephew. Damario and Ramira are very close and rely on each other, though Ramira does not know about his fate as a chosen one fighting demons.