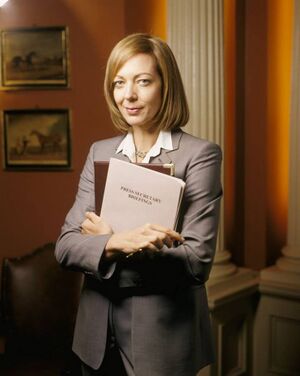 Councilwoman Elizabeth Morrow is a public servant in New Gauntlet City whose constituency includes College Hill—and who seems to keep getting mixed up in the supernatural machinations of the city.

She has a focus on urban renewal (or, less charitably, gentrification) that sets her at cross-purposes with Anna Kogotov, a werewolf who claims territory within her district. As it turns out, Morrow was abducted as a child by an occult order and rescued by Malachi Spektor, but not before she glimpsed something beyond the mortal veil.

In the Narcosis Comics crossover event Coven Prime, Morrow was recruited to The Ozroch Plot to replace the Vigilants of Coven Prime. The plot was thwarted, and Malachi convinced Anna to spare the Councilwoman, who may have been participating without understanding Ozroch's villainy.

In the Coven Prime "Ex Libris" ongoing series, Morrow redoubles her efforts to develop her district. Morrow's head of security, Valentine LeBeau, attacks werewolf pack member Lucas Ford as a warning to Anna. Anna eventually kills Valentine right outside Morrow's office, then enters (seemingly rueful?) to hash things out with the Councilwoman. We later learn that Morrow and Anna came to an arrangement where city personnel would consider Anna an authority over her neighborhood.