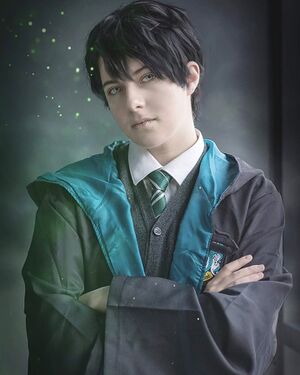 Coriander (aka "Cori") is a fifth-year student of wizardry in House Serpentine at Hedgewick Academy. He is of mixed magical and mundane heritage, and his grandfather is the former magical supervillain the Professor of Predigistration, now working as groundskeeper for the school.

In his fifth-year at Hedgewick, Cori got into trouble while trailing his friend Noah Ford to headmaster Oliver Hedgewick's office in Coven Prime. Scared off by a security sphinx, Cori snooped around and ended up blackmailing Serpentine seventh year Cassiopeia Collywog and her secret Burrowdown boyfriend Gawain Trisagion to get into Coven Prime through Gawain's prefect privileges. In Oliver's office, Cori swiped a pair of time-bending spectacles to give to his grandfather, then fled with his friends from the dark wizard Adriel. He soon after helped Noah, Adrementitia Grey, and Arsenius "Arsenic" Adebayo foil Corvid's attempt to rob Hedgewick.

When last seen, Cori had approached Wilhelmina Schmidt at the Hedgewick All Hallows' Ball, possibly stumbling into her plan to dose him with love potion or possibly making a genuine connection.

In a later appearance, Cori turned as part of an Optimax Industries expedition to the mysterious island in the Lake of the Lost, apparently having been expelled from Hedgewick. After learning some courage (and befriending some dinosaurs) Cori earned his way back to Hedgewick.

Cori is not to be confused with Brightling aka "Cori," whose nickname is short for Quorisipas.

Cori was a PC in Alexi Sargeant's Hogwarts RPG game in August 2019, played by Rich Rogers. He re-appeared in Alexi's Escape from Dino Island game in October 2020, also played by Rich.