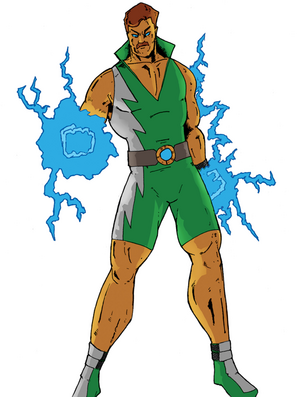 Coppertopper was once a proud member of the New Gauntlet City Police Department and worked in the famous Precinct 13. One day while investigating a weird shipment at the docks, he was exposed to some nuclear waste, which made him sick, but later gave him superpowers. His skin is made of copper, and he can conduct electricity through his body and throw it at people.

Coppertopper joined the Future Legion when they were "good guys" working for Alistairs' by serving Scoville Terrace, but he was extorting local businessmen for his "super services". When their villainy was exposed on SeeYa.com, the team switched to full-time villainy, and Coppertopper didn't mind much.

Apparently, he has found work as a security guard at New Guard Academy.