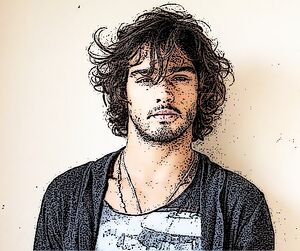 Colby Hikaru is the arcanely-gifted wizard son of Hikaru Katsu (before she became the Champion of Nike), and Odin, the Norse All-Father. He was informed about his divinity by the ghost of Richard Wagner. In general, he thinks gods, and Odin specifically, only have children to act as pawns. He claims he hates the idea of being a pawn, and so prefers to keep gods off the planet as much as possible. Recently, he moved into a house in the Gate district and joined up with some other Demigods: Pillar, Danny Moloka'i, and Althea "Allie" Darden.

Colby was a PC in Rich Rogers's Demigods PbtA game in March 2019. He was played by Jason Cox.