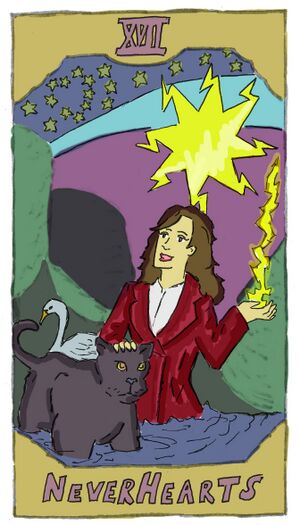 Cenobia Palmiras is an exiled fae of the Storm Court who leads an elegant life in New Gauntlet City. It is possible that she is the true heir to the Storm Court throne. Cenobia is the main character of the mature-readers comic series "Neverhearts."

In the Narcosis Comics series "Ex Libris," sequel to "Coven Prime," Cenobia investigates a number of shadowy rumors in the city, including the stolen volumes from the magical library, the unburied dead rising en masse, and attacks by fae moon court assassins. Cenobia works more or less willingly with Anna Kogotov, Silas LeBeau, and Xania Treestop. Cenobia fended off moon court assassins with the help of the Oracle Xania and her slick chauffeur Stephen at the abandoned law offices of Ozroch, Ozroch & Ozroch, where Valentine LeBeau had fled after attacking Lucas Ford, a member of Anna's pack. She was later revealed to have escaped without injury.

Six weeks later, in the ongoing Coven Prime: Ex Libris series, Cenobia moved into the LeBeau mansion, which she had bought at auction, after her apartment was damaged in a fire. She later fought a moon court assassin, who had been able to enter the house after Silas let the wards down for a visitor. She was shot, and was last seen on her way to the hospital with Valentine LeBeau.