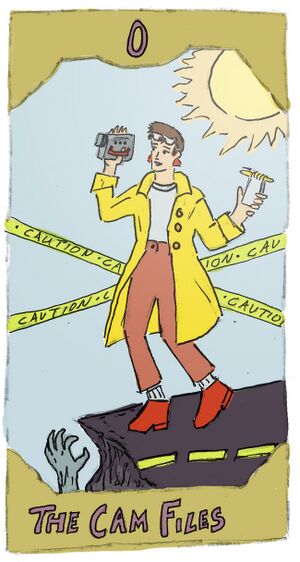 Cam (full name Camilla) is a mortal investigator aware of the supernatural ever since her journalism school English professor turned out to be a demon. Now Cam lives in New Gauntlet City, in Anna Kogotov's territory, working to uncover the supernatural secrets of the place. Cam is the main character of the mature-readers comic series "The Cam Files."

In the Narcosis Comics series "Ex Libris," sequel to "Coven Prime," Cam investigates a number of shadowy rumors in the city, including the stolen volumes from the magical library, the unburied dead rising en masse, vampire impresario Vincent Brama running feral in the sewers, and the Fury possessing DA Mia Burke. Cam works more or less willingly with Anna, Silas LeBeau, and Santiago. Cam was last seen sneaking Silas and Santiago into the DA's office just in time to disrupt an occult ritual. The DA was freed, but Cam was trapped inside a magical book in the process. Silas took the book home with the intention of (eventually) getting Cam free from it.

Cam was a PC played by Ben Swinden in Jim Crocker’s Urban Shadows game in July 2019.