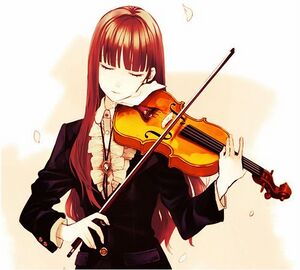 Alicia Chance, also known as Cadenza, is a hero-for-hire in New Gauntlet City. A busker equipped with a violin, she plies her trade in the neighborhood of Chantsville. She has no inherent superpowers, instead manipulating the world around her through spells and magical artefacts, with her violin as a particular focus. Quite snide and unwilling to reveal just how much she cares.

A runaway as a teenager, Ali was taken in by the Twilight Orchestra, a cult seeking to bring about their Dark Madonna, prophesised to sing humanity to sleep. She found a strange family within the cult and worked up its ranks, becoming a trusted troubleshooter for the group. She found purpose and clarity within the group, even falling in love with one of its archivists, Cecelia Knight.

Cecelia, however, was less happy within the cult and tried to convince Ali to break away from the group with her. Cecelia offered to be the mother of the Dark Madonna and gave birth to twins. Unfortunately, her plan to spirit away the twins went awry and Ali had to betray the cult to spirit Cecelia and only one of the twins away from the Orchestra.

The two separated for a while as Ali tried to figure out what she wanted to do after leaving the cult. Ending up in New Gauntlet City, she resolved herself to making up having helped the cult by plying her knowledge and trade to superheroism. She ensconsed herself in Chantsville, ending up as a member of the Chantsville Crusaders as the streetwise mystical musician, Cadenza.

Recently, Cadenza had been seconded for more training to a team called the Hopefuls but was taken down in an attack by the School of Hard Knocks by Fermata, a faithful student to the Orchestra. Despite her circumstances though, Cadenza managed to escape through the use of a counterspell she had woven into the Orchestra's musical mind network, left open accidentally by Fermata.

Cadenza was a PC in Rich Rogers's Hit the Streets one-shot for Gauntlet Con 2019. She was played by Leandro Pondoc.