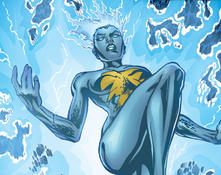 Esther Kushel, aka Blitz, is a member of the Sound Park Protectors. She was a Jewish internee at a concentration camp, where experimentation by Nazi scientists granted her electrical powers. She used these powers to escape, liberating the entire camp, and hanging onto the lead scientist's strangely alien helmet to use as a mask.

Esther and her grandmother (her only German family member to survive the camp) came to New Gauntlet City as refugees and lived with Esther's aunt and uncle in the apartment above their store. Esther kept her superheroic identity and activities secret from almost everyone save her grandmother. She didn't even unmask in front of her teammates until the Sound Park Protectors had to push themselves to the limit to rescue the lost and forgotten Gautleteer.

Ultimately, Esther dropped her mask and unleashed her powers to shut down Xander Solomon's Forward Guard and reclaim the stolen Gauntlet—but a reporter snapped a picture of her in the process, so her heroic identity is no longer a secret one.

Blitz was a PC played by Dan B. in Alexi Sargeant's June 2020 entry in The Gauntleteer is Missing crossover.