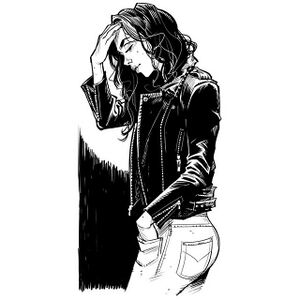 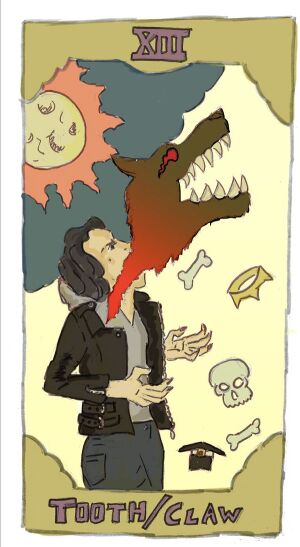 Anna Kogotov is a territorial werewolf and star of the mature-readers comic series Tooth/Claw. Anna leads a werewolf pack that claims a somewhat rundown stretch of New Gauntlet City as its territory.

In the Narcosis Comics crossover event "Coven Prime," Anna aided Inspector Spectre, Rosalind McDonaugh, and Jeremiah Hunt to uncover a plot against Coven Prime involving, among others, her vampire frenemy Vincent Brama, the Witchhunters who'd earned her ire by attacking her mentor Diamond Ford and her pack, and the demon law firm Ozroch, Ozroch, & Ozroch. At the climax, Anna killed the witchhunter leader, but was convinced by Spectre to spare Councilwoman Elizabeth Morrow, who was also involved in the plot but may or may not have known what it truly entailed.

In the ongoing Coven Prime series spinning out of the crossover, Anna sank deeper into darkness. Unknowingly affected by the Fury possessing DA Mia Burke, Anna became obsessed with seeking vengeance on Valentine LeBeau after she crucified Anna's pack member Lucas Ford on his dining room table as a warning. Anna attempted to shoot her during a parlay in Coven Prime, but Valentine's brother and Anna's friend Silas LeBeau took the bullet instead (and lived). Anna was mystically banished from Coven Prime—only Diamond Ford's mercy prevented her from being summarily executed. Nevertheless, Anna still went after Valentine, finally killing her outside Councilwoman Morrow's office. It was later revealed that she made a deal with Morrow to make her territory sovereign territory, free from the influence of the city government.

When an artifact called the Shroud of Mortality, and then Lucas, fell into the hands of a mortal named Paul Atwood, Anna pursued him. Badly injured in her first attempt, she later broke into Atwood's house alongside Silas, with help from Rosalind and Xania Treestop. They rescued Lucas, but Atwood ordered Anna's territory burned down in retaliation for the attack. Anna hunted him down later that day, but, emotionally exhausted and believing her territory had been destroyed, ultimately could not kill him. She returned home to find that Vincent had evacuated everyone in time. Despite advice from several people to leave town and rest, she took Cenobia Palmiras's advice to wait and take revenge, and stayed to rebuild her territory—and prepare.

When Cam opened the doorway to the afterlife to return to this world—and caused a mass incursion of undead—Anna remained in her territory rather than fleeing. She turned several new werewolves, and worked with Vincent and Grizelda to keep the area safe. Cenobia encountered a feral Anna at the Odeyei Estate, and brought her to Coven Prime. Anna worked with Cenobia, Adrementitia Grey, and Maura Stern to stop the undead for good, eventually becoming a secondary vigilant, though she did not give up her territory. The four willingly sacrificed themselves to close the door.

Anna Kogotov was a PC played by Sarah J in Jim Crocker’s Urban Shadows games in February, July, and September 2019.