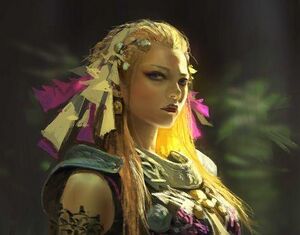 Althea Darden is the daughter of Neil Darden, the Garden Guy (tm) and Persephone, the Queen of the Greek Mythological Underworld. Althea, aka "Allie", is dating Deimos and has traveled the world with her semi-famous father while spending time with her mother and step-dad in the Underworld a few months a year (always eating out of Tupperware-packed dinners). Recently, she moved into a house in the Gate District and joined up with some other Demigods: Pillar, Danny Moloka'i, and Colby Hikaru.

Allie was a PC in Rich Rogers's Demigods PbtA game in March 2019. She was played by Sherri Stewart.