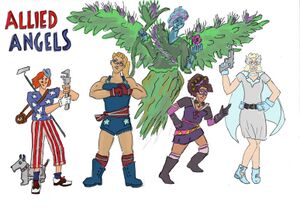 The Allied Angels were a team of young women superheroes active in New Gauntlet City during the Second World War, fighting against Nazi fifth columnists and saboteurs on the homefront. Their members included:

Liberty Gal, with no powers besides pluck and a robot dog

Snapdragon, plant princess from the underground realm of Rynoon

Maddie Midnight, latest in a long legacy of monster hunters

Phantom Pain, a young woman caught between life and death by ghost bullets

Raggedy Jan, a rebellious illusionist from the wrong side of the tracks

Trailblazer, a brainy inventor with a mech-suit dubbed Justice Hammer