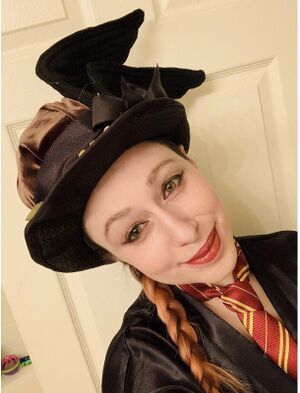 Adrementitia is a fifth-year student of wizardry in House Lionheart at Hedgewick Academy. She is descended from a magical family and has five older siblings who passed through the school before her with flying colors—one of them, Patience Grey, even returned to Hedgewick to teach. Unlike her goody-two-shoes siblinngs, Adrementitia is a bit of a rebel and a prankster. Adrementitia has a rumored family connection to both Xania Treestop the Oracle and Stephen, chauffeur to fae royalty.

In her fifth-year at Hedgewick, Adrementitia got into trouble while trailing Noah Ford to headmaster Oliver Hedgewick's office in Coven Prime. The false "Mortigern Dunwiche" dropped her into the trials of Coven Prime early. She came through all right with just a little aid from Inspector Spectre, and this further bolstered her confidence that she was the truly exceptional member of her family. She also helped Noah, Coriander Tauris, and Arsenius "Arsenic" Adebayo foil Corvid's attempt to rob Hedgewick.

Adrementitia was a PC in Alexi Sargeant's Hogwarts RPG game in August 2019, played by Pearl.