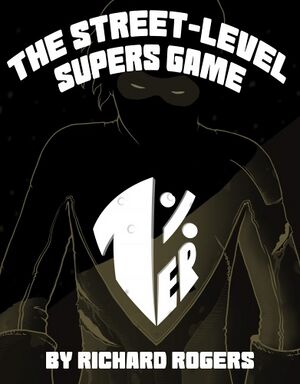 In the world of Gauntlet Comics, only one percent of people have special powers of any kind. One out of a hundred people has a gift. Now, just like on your birthday, some gifts are better than others Some folks get the XBox One X, and some people get a nice little gift card, not bad, but well, nothing earth-shattering, you know? This game is about the latter - folks who put on cape and cowl, but aren’t the all-powerful or the amazing. They aren’t part of an international super team. This is about street-level superheroics.

Think Marvel Daredevil rather than the Avengers movies.

1%er Supers is currently in alpha playtest. It's based on 1%ers, a game from Creepy Doll Studios, written by Robert Nolan. Rich Rogers is the lead developer for the Supers hack of the game.